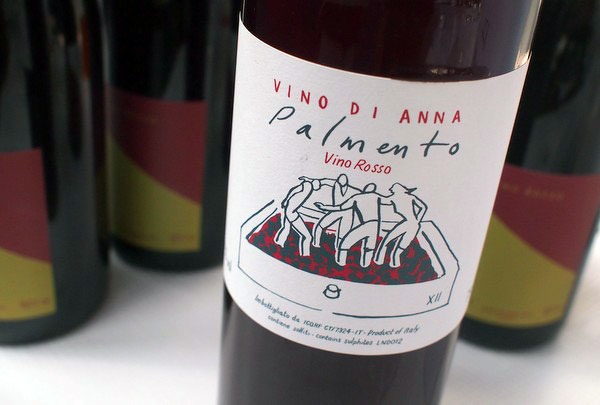 The Anna in Vino di Anna is Anna Martens. She grew up in Australia, and began making wine at Petaluma in the Adelaide hills, where she stayed for a decade. She left Australia 13 years ago and ended up in Tuscany, making wine at Supertuscan estate Tenuta dell’Ornellaia. The next stage in her wine journey was meeting Andrea Franchetti: she began working at his biodynamic Tuscan estate Tenuta di Trinoro. It was Franchetti who led her to Mount Etna in Sicily, where he owns celebrated wine estate Passopisciaro. She worked for him for three years.
Anna’s significant other is Eric Nairoo (above), who founded UK wine importing business Les Caves de Pyrene. Eric and Anna were so enamoured by Etna that they decided to make wine together here. They now own 2 hectares of old alberello (bush) vines, most of which are Nerello Mascalese, but also including other varieties such as Nerello Cappuccio, Grecianco and Carricante. The vineyards are at altitude (760-900metres) and are farmed organically.

The Vino di Anna wines are made on their small property without much intervention, using native yeasts and no additives, save for a little SO2 in some lots (normally nothing is added at all). A variety of vessels are used for fermentation, including Palmen+o, old barrels and a Georgian qvevri. The Palmen+o is interesting. It is a traditional, multi-level winery, and the most traditional of these are carved into the rocks. The top level contains vats in which the grapes are foottrodden. The free run juice then flows into another vat on the next level where it ferments. The skins and pips remaining on the top level are pressed under a wicker mat (a ‘donkey’) and the extracted juice joins the free-run in the lower vat where fermentation takes place over a few days. Then the wine goes down another level into barrels.
These are truly interesting wines, full of personality.

This is Grecanico with a bit of Riesling and Chenin, and there was some skin maceration to give backbone as this was a low acid year. 11.5% alcohol. Lovely bright, fresh citrus and pear fruit with lovely purity and a bit of grip. An amazing wine. 93/100

Three days of maceration in Palmen+o. Pure, silky, elegant and fresh with joyful fruit and a hint of earthiness. Amazing elegance and freshness with juicy cherries and some tannin. 93/100

15.8% alcohol. ‘This is not what we want to make,’ explains Eric Nairoo, but it was a ripe vintage harvested in October, when normally we’d harvest in November.’ This spent October to April in 200 litre qvevri, and wasn’t touched. It’s sweet, warm, spicy and a bit earthy with lovey grippy tannins and nice detail. This definitely tastes a bit warm but it has lovely character. 92/100